January 25, 2022
There's something about a thief that's fundamentally very disturbing to me. While I confess to having engaged in some petty larceny in my misguided teens, I outgrew it as soon as I went to work and gained an appreciation for the life-hours a man puts in to establishing his own property. If a man is able enough to rustle cattle, he is able enough to get a job and earn his own way. Jonathan reminds me of myself in my bolder twenties, thirties and even forties. Whether as a cop or a civilian, many was the time I observed criminal activity and, completely devoid of fear or thoughts of self-preservation, dove into a fray to apprehend the thug. I don't think that fervor was the result of a desire for justice so much as a passionate anger-flare that blinded me to the risks. Looking back now, it seems a miracle-protection from God, that I never got seriously hurt. Ridin' For The Brand When my partner and I had split up
The sun had just ducked behind a butte
We'd been huntin' strays all day
But hadn't borne much fruit Jonathan come a racin’ back up to me
His black gelding all a' lather
"Come quick David", he hollered,
"Some no-goods are rustlin' up a gather!" “They're right east of Tiltin' Rock
Where the two-track crosses the hollow
That fills up when it rains
They oughtn't be hard to follow" "I think they've got one heifer loaded
And were startin' in on another
But it's a wet cow for sure
Gonna leave some calf without a mother!" I didn't think or even hesitate
Jonathan was like my brother
Besides, we'd signed to ride for the brand
We'd snag these thieves one way or another Off we galloped towards that rise
Me easily shuckin' my thirty-thirty
Leverin' a round into the chamber
Cattle rustlin' was low-down dirty You might need to understand
This wasn't eighteen-eighty-five
Long past days o' cuttin' a herd
In an olden days cattle drive No Sir this was two-thousand twenty-one
Using a stock trailer and a pickup
Cattle thieves may have become adapted
But these boys were headed for the lockup When we first come on 'em
They were brazenly loadin' up a cow
Johnny flew outta' the saddle
Hittin' 'Red-Shirt' like a plow With my Winchester pointed skyward
I rapidly fired off two shots
To underscore we were dead serious
Resist and they’d be worse than tied in knots While I covered 'Fat Belly'
On 'Red-Shirt's backside Jonathan knelt
Tyin' his wrists behind his back
With a piggin' string pulled from his belt Jonathan stood watch over the snivvelin’ outlaws
While I rode out to the four lane
Them rustlers had made their sorry beds
But you'd never know it hearin’ them complain Turns out a friend from the feed store
Was passin’ in the first car I’d seen
I asked him to send out the sheriff
To gather evidence at this crime scene A deputy would take these two into custody
Seein’ as the livestock agent was so far away
Hopefully word would spread of their arrest
To keep other wannabe rustlers at bay I couldn't help but smile at 'Warrior' Jonathan
As I re-lived it in my bunk that night
He had fearlessly bulldogged that crook
While I'd been safe hidin' behind a gunsight After we finally came down from the rush
We both slept exhausted all night
We’d never caught rustlers red-handed before
And were grateful they hadn't put up a fight There was a unique buzz and excitement
In the bunkhouse the next day
Everyone wanted to hear again
How we'd held those rustlers at bay It was really hard to describe
But we were far from special brave
Any of the boys woulda' done the same
Our branded Herefords to save Lookin' us straight in the eye with thanks
The boss offered we was each a top hand
Jonathan scuffed the floor and shrugged sayin',
"Well Sir, we did sign on to ride for the brand" by Rik Goodell

I continue to be grateful for the generosity of the Price family in agreeing to allow me to post a copy of this painting alongside my work. See more of this artist's work at https://clarkkelleyprice.com/ 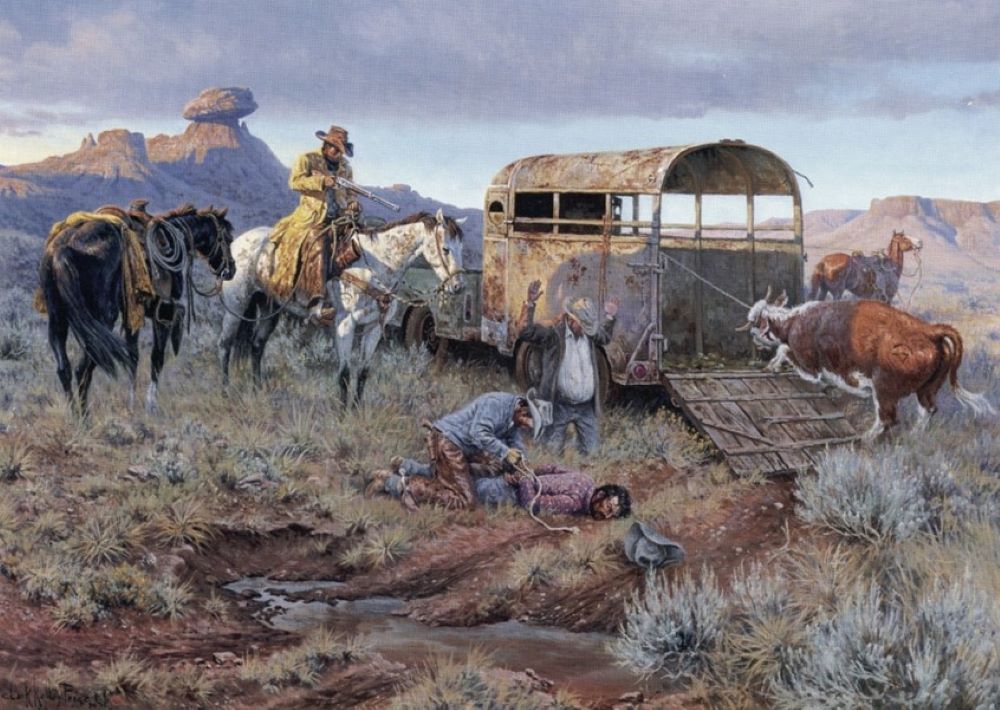 Buy The Why We Cowboy CD